As part of a school assignment, I gave a TedTalk about my leg condition, Lymphedema and awareness.

My Research Paper on 'Femvertising'

I wrote a 4000-word research paper about feminist advertisements (called 'Femvertisements') attempting to celebrate women rather than objectifying them. However after analyzing them, I deduced that while the ads were trying to dispel female body stereotypes and norms, they end up reinforcing them.

I was born with a physical abnormality; a leg condition that causes my left leg to swell larger than my right. I was invited by Seventeen Thailand Magazine to speak on the topic of female body image and encouragement.

The Truth Behind Makeup 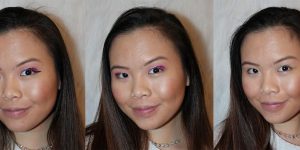 In this project, I was assigned to convey the concept of truth. I took an image of a woman wearing a full face of makeup and captured a photo after each layer of makeup was removed. This showed the process of a full face to a natural face.